A perfect location for those looking for a peaceful place 'away from it all'.

​As we work to build the next PORT of call, we are also working to open a new market in Mount Vema.
Strengthening strategic alliances and partnerships worldwide. Work with us. ​​
KINGDOM OF MOUNT VEMA
​The Vema Seamount Territory 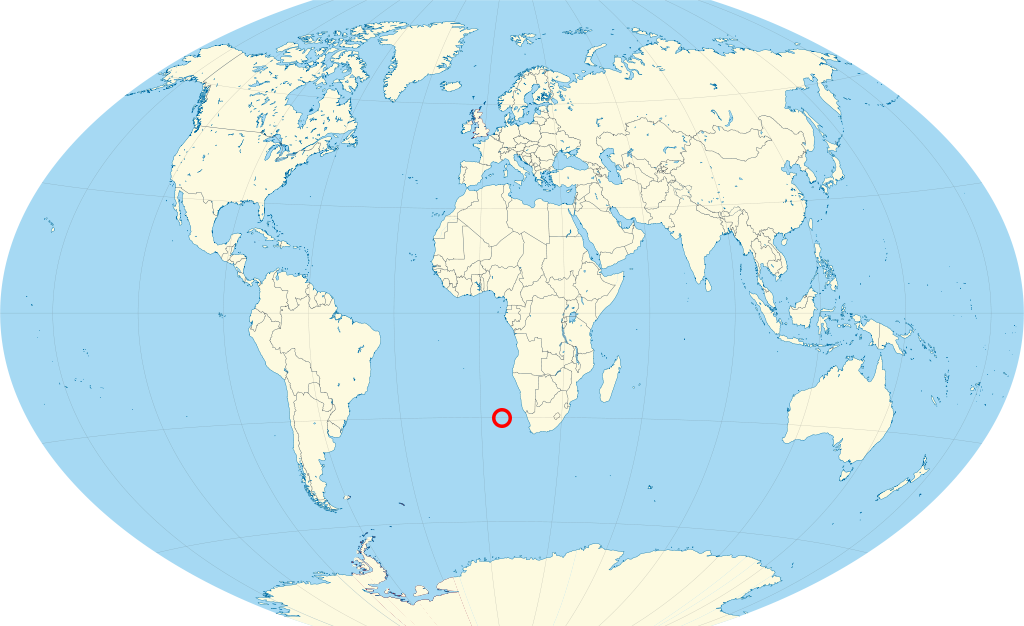 Geographic Location:
31 38' S  8° 20' E
When people think of Mount Vema or Vema Seamount today, images of water, fishery, royalty and wealth spring to mind. However this unique South East Atlantic territory, is not just ​a submerged ancient island, once at the surface of the sea which eroded by millions of years of wave action. Mount Vema is a monument, a piece of rock inextricably linked with The Vema Seamount Authority - Peter J. Goldishman who has managed to propel this once overfished and almost forgotten submerged island, to a well-managed and well-regulated fishing ground, and transformed it, to its greatest ever imagined state of wealth and prominence.

The Flag of the State
Flag Description
Two equal horizontal bands of white (top) and gold, with a navy blue (top) and red square bordering the white center which represents peace.
The evolution of the Mount Vema Community from a claim of a submerged ancient island which has eroded by millions of years of wave action, to today's statehood, adding to the existing number of sovereign nations in the world and the number of existing monarchies, stands as an unprecedented phenomenon in the history human evolution. ​

National Holiday: Independence Day, August 1st | Independence: 2006 (beginning of permanent rule by the Monarchy of Mount Vema) Before the year 2006, Mount Vema was never a nation or part of a nation, an empire or part of an empire, nor a trusteeship. 2006 does not represent "independence" in the strict sense, but rather a significant nationhood event which is the founding date of the nation. The significant establishment of statehood based on an ancient island (known today as Vema Seamount) which has eroded by millions of years of wave action.
Government | Congress | Elections | Legislation | Legal System | Declaration of Sovereignty | Constitution

​Origin of the Name

Mount Vema which pronunciation is,
15 YEARS OF ROYAL HISTORY

The evolution of Vema Seamount (Mount Vema), a submerged ancient island which has eroded by millions of years of wave action, from its claim in 2006, more than 50 years after it was discovered in the late 1950s stands as an unprecedented phenomenon in the history human evolution.

Before the year 2006, Mount Vema was never a nation or part of a nation, an empire or part of an empire, nor a trusteeship. Its sovereignty, declared in 2006 by Peter J. Goldishman does not represent "independence" in the strict sense, but rather a significant nationhood event which is the founding date of the nation.

The establishment of statehood by Peter J. Goldishman based on this ancient island once at the surface of the sea, and now below sea level, gave birth to a new Monarchy and what is now officially known as Kingdom of Mount Vema.

The Story of the Kingdom of Mount Vema, is inextricably linked with that of its founding father The Vema Seamount Authority -Peter Goldishman. The story of Peter is a journey that begun in Lobito, Angola where he was born ,and it is very much part of the South Atlantic East and the story of ANGOLA, NAMIBIA, AND SOUTH AFRICA.

As a child he witnessed and met many of the men of SWAPO of Namibia, the ANC of South Africa, the Cubans and his fellow Angolans that were part of the struggles, where many gave their lives for freedom back in the 1980s against the apartheid South Africa so the region could be set free.

The struggle for some of the people of that era, ended after the Battle of Cuito Cuanavale in the South of Angola, but it was from the Port of Lobito where day after day he and others witnessed the arrival of the men (whom he would eventually be called to join as he was coming to age) who came to join that battle which led to the peace treaty mediated by the United States, and which concluded with the freedom of Nelson Mandela, and the independence of Namibia.

In the end Peter did not have to put on the uniform. Still in his teens when that battle ended, he left Angola, and when in his late twenties he moved to the United Kingdom, where the charts of the South Atlantic were presented to him by chance and ‘Vema’ was brought to his attention. At that time there was nothing about Vema Seamount on the internet or anywhere else. Very few people knew it existed.

​Today, Mount Vema is a well-managed territory. The once overfished and almost forgotten submerged island, has been propelled to a well-managed and well-regulated fishing ground, transformed to its greatest ever imagined state of wealth and prominence.
Watch Live!

His Mount Vema Majesty King Peter Goldishman is the Head of State, and the titular leader of the territory who represents the state at official and ceremonial functions. However, The Head of Government, which post is currently vacant, is the Prime Minister of Mount Vema, the official who is in charge of The Capital House administration which, is the main administrative body with duties to manage the day-to-day domestic activities of His Mount Vema Majesty's Government.

Cabinet: The Cabinet is composed of a body of high-ranking advisers who run the ministerial departments. They are nominated by the Prime Minister, and appointed by the Monarch. However because the post of Prime Minister is currently vacant, the Head of State is currently also the Acting Prime Minister and delegates the work to the departments run by freelancers with specialist knowledge in their field of expertise.

Elections: The Monarchy is hereditary, followed by general elections to elect a Prime Minister who governs for a four years term. The Congress of Mount Vema >>>read more

Mount Vema's current foreign policy is to consistently implement a policy of independence, self-reliance, peace, co-operation, and development, as well as openness and diversification/multilateralization with international relations. Mount Vema declares itself a friend and partner of all countries in the international community, regardless of their political affiliation, by expressing its willingness to actively taking part in international and regional cooperative development projects.>>>overseas services
Mount Vema Citizenship
​Passport Services
Right to Basic Income | Healthcare | Social Housing

ECONOMY
The Economy of Mount Vema

Economy | Trade | Exports
Reserve Bank | Central Bank | Revenue Services | Stock Exchange | The Currency
The Kingdom of Mount Vema has a prosperous economy, based on a comparison of GDP measured at purchasing power parity conversion rates. The Mount Vema real estate although off-plan, is already highly valuable. The 1.6 trillion golles total value of the Kingdom of Mount Vema entire projected property stock and the Vema Seamount territory itself is more than the combined gross domestic products (GDP) of some well-developed countries. The Vema Seamount territory with its marine life alone is an asset that represents the value of ownership of the Vema Seamount Authority that can be converted into cash as collateral at any time to enable His Mount Vema Majesty’s Government to raise finance to pay for the country’s obligations...>>>more