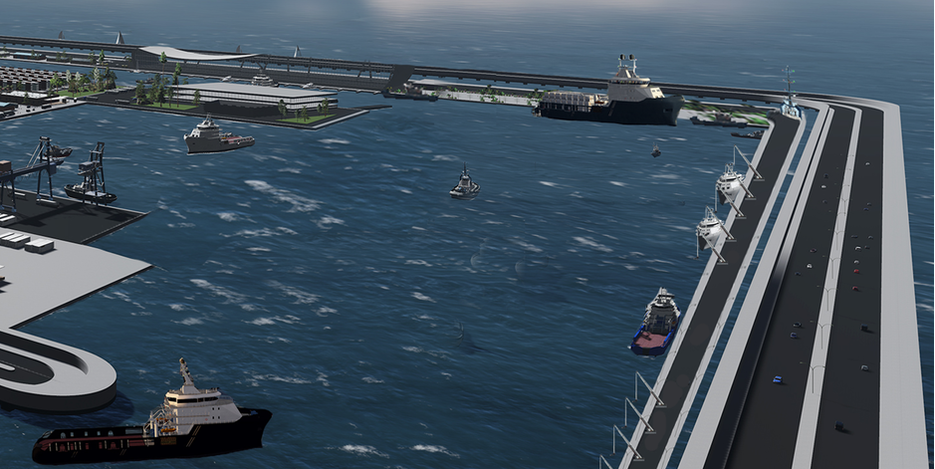 ​The Port of Mount Vema was first redesigned in 2018 to move the Airport south of the Island to add a second runway to the Mount Vema international airport project. However in 2021, the Port was redesigned to increase manoeuvrability of large ships. The Port of Mount Vema will have a berth capacity of about 12 kilometers and will be among the few deep-water ports in the world capable of handling ships of any size and handle every kind of traffic.

The port will have significant international traffic and customs facilities, harbor pilots and tugboats to maneuver large ships in tight quarters when near docks. It will combine all services, including cruise home port where cruise-ship passengers will board getting on or off ship (or embark) to start their cruise and disembark the cruise ship at the end of their cruise.

It is also where the cruise ship's supplies will be loaded for the cruise, which will include everything from fresh water and fuel to fruits, vegetables, champagne, and any other supplies needed for the cruise.  Port of call services will also be provided where cargo ships may take on supplies or fuel, as well as unloading and loading cargo.
The Port in Mount Vema:
Customs and Excise Control Areas within the Vema Seamount Territorial waters

Appointment of Ports
The Commissioners in Mount Vema, may by order made by statutory instrument appoint and name as a port for the purposes of customs and excise any area in the Kingdom of Mount Vema specified in the order.

The appointment of any port may be revoked, and the name or limits of any such port may be altered, by an order under subsection (18.1) of the Customs and Excise Act, Mount Vema 2018.

The Commissioners may in any port from time to time appoint boarding stations for the purpose of the boarding of or disembarkation from ships by officers.

Approval of wharves
The Commissioners may approve, for such periods and subject to such conditions and restrictions as they think fit, places for the loading or unloading of goods or of any class or description of goods.

The Commissioners may at any time for reasonable cause revoke or vary the terms of any approval given under section 19.1 of the Customs and Excise Act, Mount Vema 2018.

Maritime Pilotage
Due to underwater and general development works, ​the Vema Seamount Authority employs Maritime Pilots to assist with manoeuvring of cruise ships and other visiting ships through the Vema Seamount territorial waters.  The Maritime Pilots are experienced shiphandlers licensed by the Coast Guard and possess detailed knowledge of the Seamount and its actual depths, direction and strength of the wind, current and tide at any time of the day, and they can be booked at least 15 days in advance.  - Vema Seamount Maritime Services - Contact Us

Elections
The sections that will make the City of Mount Vema are currently being built outside Mount Vema however, Mount Vema citizens, and owners of a Mount Vema Title Plan can already vote for, or stand for Governor of The Special Administration Zone, or Representative for Congress.